10 Types of Instrumental Music – You Must Know 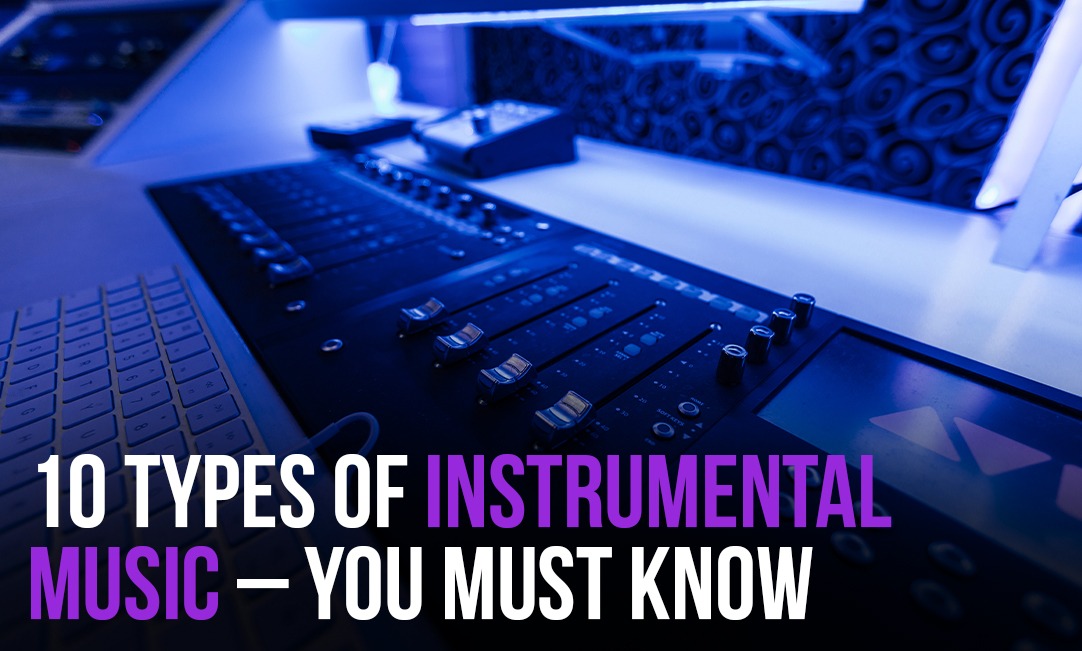 When discussing instrumental music, one of the first genres that come to mind is classical music. Many times referred to as the formal side of western music, classical music makes extensive use of only instrumental accompaniment and excludes vocals in many instances.

There are many types of classical music, most of which are instrumental. Vocals are typically absent from compositional forms like a concerto, sonata, and symphony.

Famous classical instrumentalists include Beethoven, Bach, Mozart, Tchaikovsky, and many others.

One of the genres that frequently emphasises instruments over vocals is jazz. In this, the flow is mostly improvised, and the focus is always on the instruments.

Due to the music's frequent tempo changes, beat changes, harmony changes, texture changes, and progressions, instrumental jazz calls for musicians to be extremely skilled with their instruments. Jazz musicians must have very advanced general musical knowledge as well as instrument mastery because improvisation plays a significant role in the genre.

Jazz music has many different subgenres, both vocal and instrumental. But they all share the trait of having distinctive rhythms, finely tuned harmonics, and improvisation.

Miles Davis, John Coltrane, and Chick Corea are some of the first jazz musicians that come to mind when thinking of instrumental jazz musicians.

Rock music that places a strong emphasis on instruments is known as post-rock or instrumental rock. It lacks singing or vocals, and the solo instrument—typically an electric guitar with a shredding melody—creates the melody.

Many common rock instruments, including the electric guitar, bass, and drums, are used in post-rock. However, a number of extras, including e-bows, slides, and reverb, are frequently used.

With musicians like Sigur Rós, Explosions in the Sky, God Is an Astronaut, and many others, post-rock has sort of taken off. The melodic nature of this genre, which does not require vocals to convey the message, is beautiful. Instead, the instruments and their melodies do so.

Post-Rock and post-metal are very similar. It emerged around the same time as the previous genre and is still expanding. Without vocals, post-metal songs are frequently driven by guitars.

Russian Circles, Cult of Luna, Rosetta, and other well-known bands are examples of notable names connected to the Post-Metal genre.

There are many instrumental songs, especially in the post-punk genre, although instrumental punk is less common than instrumental rock. Post-punk songs draw inspiration from a variety of musical genres, including funk, electronic music, jazz, and dub, despite sharing some similarities with punk in terms of aggressive power chords and fast tempo.

Post-punk songs are excellent fusions of various production techniques and influences from various genres, and they may or may not have vocals.

The term "Electronic Dance Music" (EDM) refers to a variety of percussive electronic music genres that are frequently played in nightclubs, festivals, and raves. Vocals are typically absent from EDM, and the beat is the main attraction. DJs produce the music by choosing tracks to include in a mix.

There are numerous genres of electronic dance music, including house music, techno, trance, dubstep, and many more. EDM music frequently lacks vocals and lyrics, but obviously, this varies by subgenre, artist, and song. EDM songs are made to be danced to, so the beats and rhythm are more important than the lyrics or melody.

Bluegrass is an additional instrumental music genre derived from American roots music that is primarily played with acoustic string instruments. Vocals may or may not be present in bluegrass songs. It is a wonderful fusion of traditional Afro-American blues and jazz with British ballads and dance tunes.

The fiddle, five-string banjo, guitar, mandolin, and upright bass are frequently used in bluegrass music performances. A variety of instruments, such as a resonator guitar, harmonica, or Jew's harp, may be used as the accompanists.

The unconventional music genre known as ambient emphasises mood and tone over melody, rhythm, and musical structure. Instrumental music in general, ambient music can have a fluid form in terms of composition, melody, and beat. It has textural sound layers to encourage contemplation and calm.

Piano, strings, and the flute are among the instruments used in ambient music, which has its roots in the 1960s and 1970s. Ambient music has many subgenres, including ambient dub, ambient house, ambient pop, and ambient space music.

Because it is a great genre for passive listening, ambient music is frequently played in cafes, malls, stores, airports, and public places. William Basinski, Stars of the Lid, and Brian Eno are a few well-known producers of ambient music.

Film music, as the name suggests, is the collective term for songs written for motion pictures. They are primarily instrumental music because they sometimes include dialogue to go with the movie scenes. Any genre, from classical to rock music, can be heard in film music.

Any genre can be represented in film music, but orchestral music is by far the most popular. Max Steiner, Howard Shore, and Hans Zimmer are a few well-known names.

Film music is composed specifically for each film in order to complement it. Depending on the film, it may be romantic, epic, dramatic, or upbeat.

Lo-Fi, which stands for Low Fidelity, is a term used to describe a particular type of music that embraces flaws rather than trying to make them perfect. The core elements of the genre, analogue warmth and harmonic distortion, are frequently referred to as DIY music. Instrumental music is the norm for Lofi.

When musicians began making their songs at home in the 1990s, lo-fi music rose to popularity. Lo-fi music is okay with misplayed notes, ambient noises, and phonographic flaws like tape hiss or signal cuts.

Beach Boys, Paul McCartney, Todd Rundgren, and Stevie Moore are some well-known musicians. Since lo-fi music refers to the production method rather than a particular genre, it can be similar to any genre, from rock to hip-hop.

Music lovers who prefer to listen to more melodies, riffs and solos rather than human vocals love instrumental music. Though the name is suggestive of music without vocals, it may have inarticulate vocals, spoken words, and vocal sounds. In this music, the emphasis shifts from the human voice to instruments offering more musical treasures with great harmonies, melodies, and solos that push the boundaries.

MIX Recording Studio, a professional music recording studio, supports emerging artists in several processes of music production. We offer them rental studio, mixing and mastering services along with the professional photo and video sessions. Additionally, we also update and educate you about music and the music industry through our blogs. To get updates, stay tuned in with MIX Recording Studio.